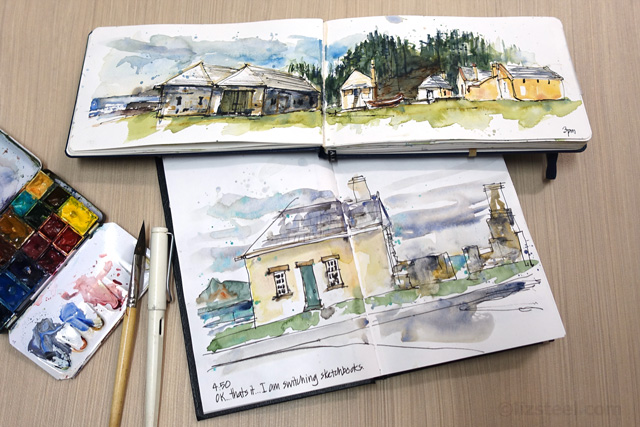 Here is the first installmant of my Norfolk Island sketches!

Please note: The focus will be process orientated rather than descriptive of my subject matter. I will be talking about how I found using a new sketchbook and what I was trying to achieve with my sketches.  I don’t actually know a lot of detail about that areas that I sketched – at the time I was more interested in recording the colour, light and spaces than I was understanding the history of the island, even though it is VERY fascinating. Ok, time to get going…

It is risky business taking an untested sketchbook on a sketching trip, but that is exactly what I did! 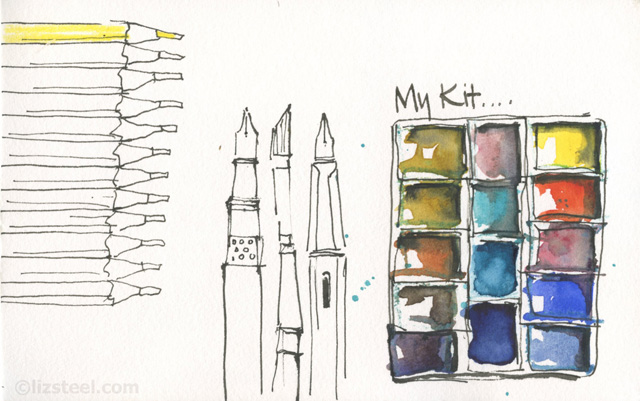 As I told you earlier, I had a goal of lightening my load and using a smaller sketchbook. Rather than using a A5 moleskine I decided to try a new sketchbook with similar paper (or so I thought) that Stephanie Bower raves about –  a Pentallic Aqua sketchbook. I know that it was a risk to rely totally on a new sketchbook and so I had included an A5 moleskine as a backup in my ‘to pack’ pile. But at the last minute I decided that was overkill, especially as I was taking an A5 alpha book as a notebook – it could be my emergency backup.

What I ended up having in my kit on day one was an unfamiliar palette, a smaller brush than I normally use, and a brand-new sketchbook. So it is not surprising that this there was going to be an adjustment period! For the very first sketch that I did (of the Lone Pine) I used my normal ‘go-to’  brush (1/2″ dagger brush) but found that my paint to water ratio was a little bit out of whack due to the smaller mixing area in my mini palette. Or that is what I thought was the problem at the time!

However I soon discovered while trying to sketch my dinner, that the big part of the equation was the paper. I really struggled to paint the texture that I wanted for this particular meal – normally I can achieve a lot of texture with a few brush strokes, but on this occasion I had to work at it, wash after wash. This reminded me of the struggles I had with The Perfect Sketchbook – you can read more here. BTW I will tell you more about my visit to Hilli in another post!

(Note: click on all the long landscape images to view larger)

On the second day, I went on a half-day bus tour around the island and was hoping to squeeze a sketch or two in during the course of the morning. Part of the tour are included morning tea at an historic house, so I was mentally prepared to sketch it while I was having my tea and scone. This time I use my smaller dagger brush and was dismayed at the result – it looked so much like my early sketches and my use of water colour was so dry. I subsequently added a few more washes over the top to get a result that I was happier with but it made me realise that I would have my work cut out to get a handle on this paper. The paper was so thirsty! 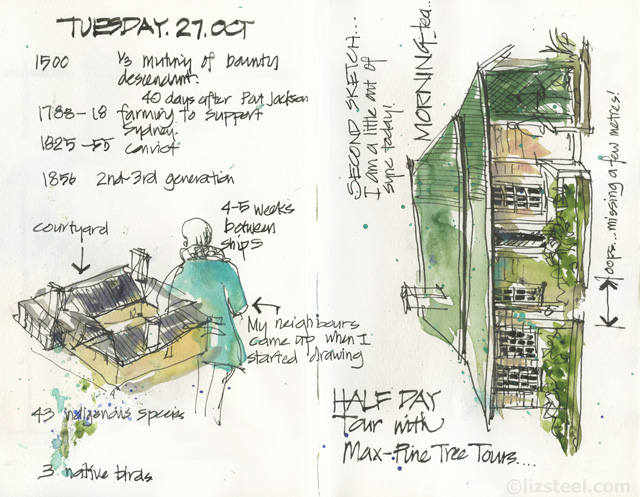 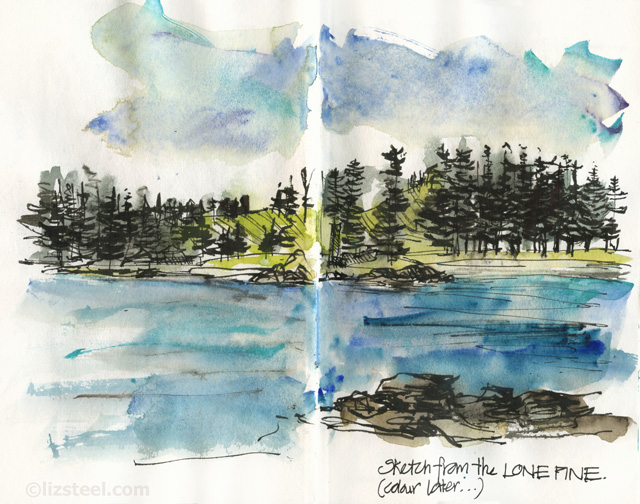 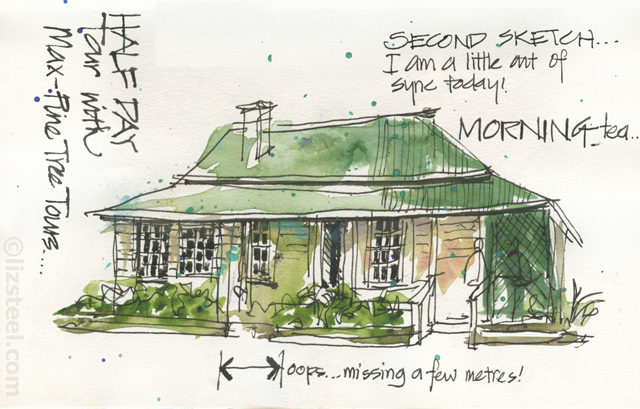 I was also using my alpha book for notes and quick scribbles during the tour so you can see how much more comfortable and confident I was with this second sketch of the morning tea house.

The next sketch in the Pentalic Sketchbook (St Barnabas Chapel on the left-hand side) was the first one that I was really happy with. This was a quick sketch that I drew in a few minutes with watercolour pencils and ink during the tour. I then painted back at my cottage with a few strokes and it worked.

But on the right-hand side was a sketch I did later that afternoon which I wasn’t pleased with. It took me ages and I got into a lot of trouble with the Norfolk pine trees –  mainly because the paper was remaining damp. I subsequently added ink lines and another wash over the top to rescue the undefined mess I had on the page… but this is something I hate doing.

I wanted to do another sketch that would be totally within my comfort zone – a group of buildings! Doing this helped me understand the paper better and what some of the major differences were with what I normally use (Moleskine, S&B Alpha). The washes are more even (do not show the brush marks), the paper remains damp (internally) much longer than I’m used to and quite bizarrely, the edges are very hard.

By this stage I was spending a lot of my thinking time pondering how I should work with this paper so I could achieve the effects I was after. But on Day Three in the morning, I had a complete disaster in the morning, and I’m not even going to show it to you. In essence the dampness of the paper and my struggles to quickly and confidently describe a Norfolk pine tree caused a big mess.

So in the afternoon, after psyching myself up, I decided to give the paper one more go with a purely an architectural subject matter (ie. not a landscape and no pine trees!) So I head back to the Kingston area again!

Unfortunately I didn’t take a photo of what this sketch look like at the time – what I am sharing with you is the final version after a second pass later that evening – but once again I found myself labouring and not achieving the texture I wanted. The fact that I was taking a lot of time to do the sketches in this book was a really big deal for me because I was supposed to be resting my wrist and if anything took longer than half an hour it was too long. 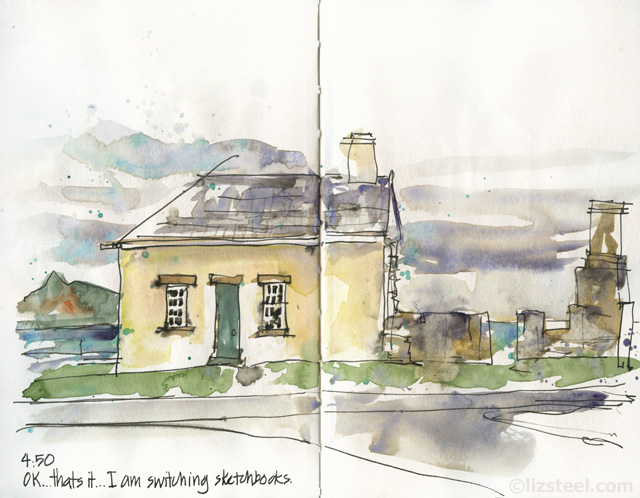 So in desperation I pulled out my alpha ‘note’ book and did this crazy quick loose sketch (in about 10 minutes) and ah! that felt better! While some of you might prefer the sketch above of the stone wall, this sketch flowed and I felt great afterwards. There were also a lot of really nice textures caused by the watercolour sitting on the surface of the paper that I just couldn’t achieve in the Pentalic book.

“That’s it … I’m switching sketchbook!” I wrote at the time. 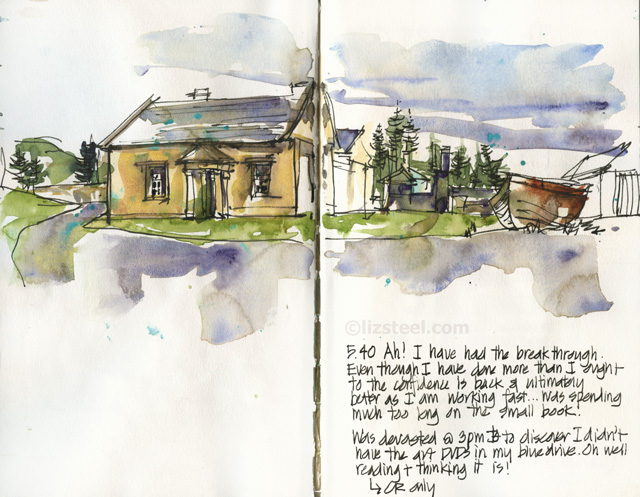 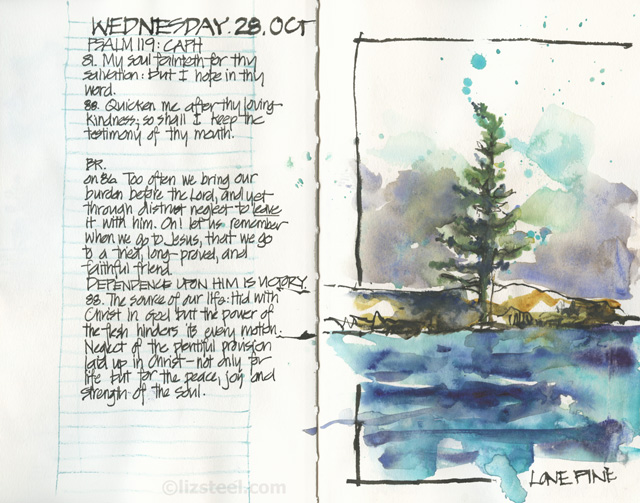 I then went on to do these two sketches, both are very loose and free, but that is what I really needed for this trip. And I felt good!!! 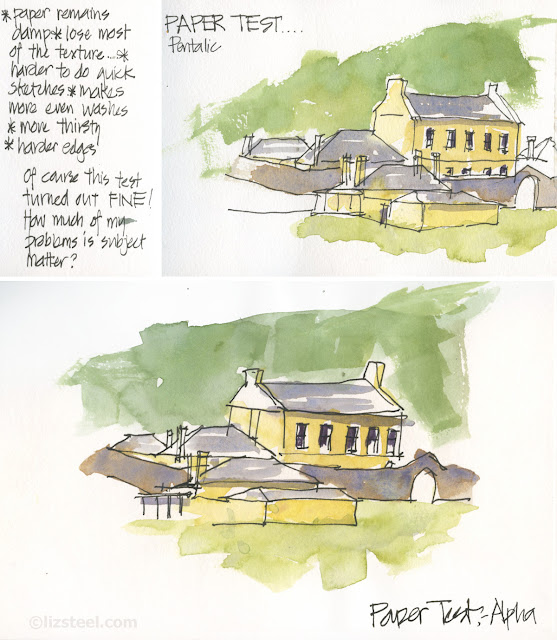 But, not one to ever give up,  my mind was still thinking about the other sketchbook! So that evening, I did two controlled tests to compare the two different papers. This test confirmed what I had discovered out location, but it also made me want to give the Pentalic sketchbook one more shot… at least! 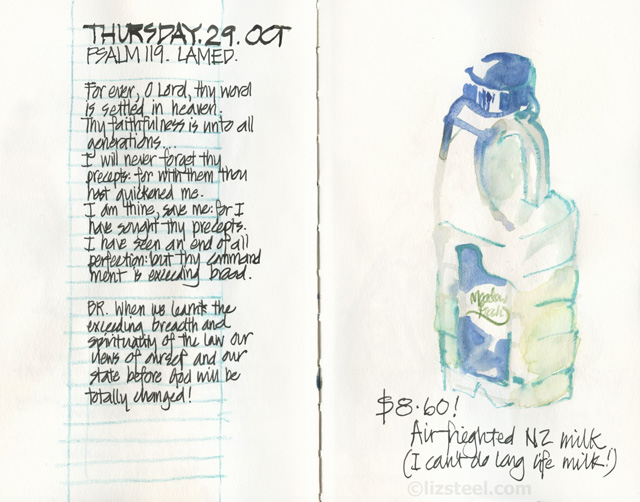 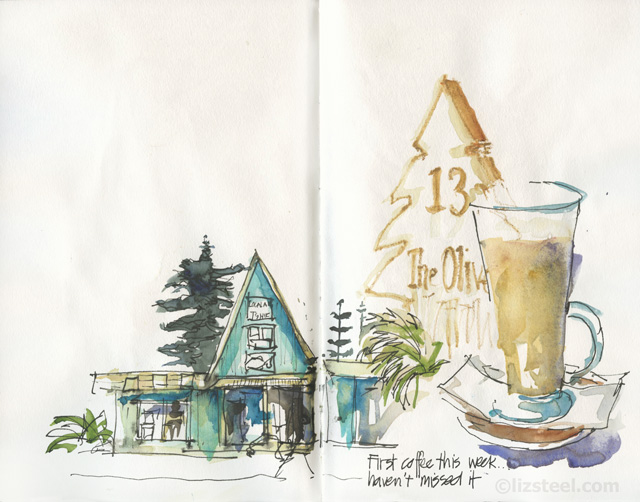 The next day I was using my Alpha book as my primary sketchbook and as a result I started thinking in a journal mode….starting to record everything: my first coffee and one of the cute A-frame buildings in the main street – curious! Ah! this book felt right! 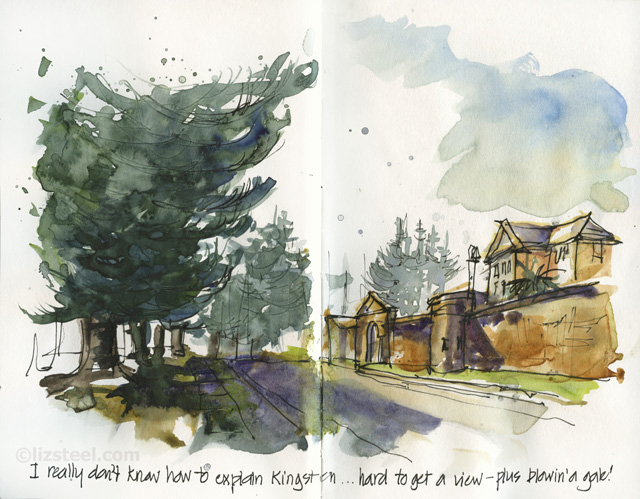 Apart from my sketchbook dilemma, I was also challenged to find the best of views that describs the historic Kingston area of Norfolk Island. It was  blowing a gale, there was no way I could sketch out on location so I was further limited – only viewpoints from somewhere I could park my car. This sketch describes the majestic row of Norfolk Pine trees and the sandstone wall to the New Barracks looking down Quality Row. 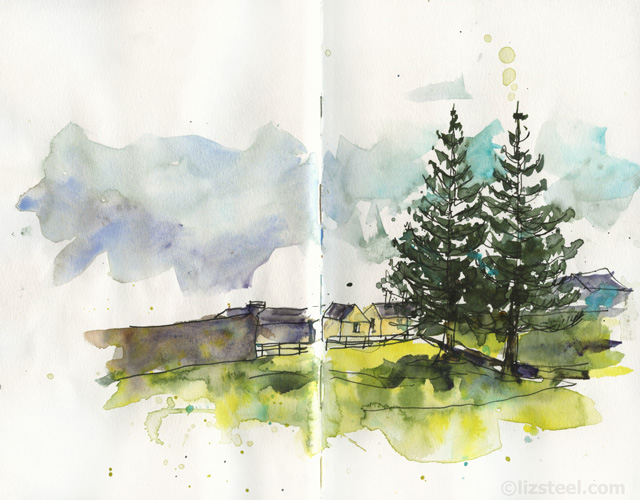 From the same parking spot, I faced south towards the ocean. This sketch was looking at the Kingston Pier group of buildings that I had sketched the two afternoons before.  I was having lots of fun achieving textures!

While I was waiting for that sketch to dry, I decided to have another crack at the Pentalic sketchbook! I never give up do I? The idea was to choose a very simple composition use a bigger brush! Once again I was disappointed with the result of this sketch at the time, but I then added another layer of paint back ‘home’ once the first pass was dry.

I now believed that I had a strategy for this book: to get the results I was after but still work at my natural pace out on location, I needed to allow for a second pass at a later time. This was far from ideal for me, but workable.

This is been a long post, but I hope that by describing my blow-by-blow account of the first few sketches from my trip, you can see how I am thinking about my materials and my approach, and more importantly working out a way to get the results I wanted. Whenever you change some of the materials that you use, be prepared for things to change.

IMPORTANT NOTE: just because I was struggling with the Pentalic sketchbook doesn’t mean I don’t think it is a great sketchbook. It is a beautiful sketchbook and I think it would suit many people. A more detailed review to follow after I have posted all of my Norfolk Island sketches.