As I have already said on a number of occasions, I fell in love with Flinders St Station and got somewhat addicted to sketching it.
I have labelled it the “SOH of Melbourne for me” (SOH = Sydney Opera House) By that I mean the iconic building, one that is located in a position that you pass by often, one that always makes you notice it and something that is just SO much fun to sketch.

So here is my collection of sketches – each one I tried a different technique.

No. 1 Tuesday. This first sketch was done in about 5 minutes standing up waiting for a train to arrive. I was so excited that there was such a great view of it from the platform and as I knew I only had minutes, I grabbed a few watercolour pencils and just went for it. The dome is obviously the focus of the sketch so I outlined that first and then as I was travelling ok with time started on the base. I had got the basics done when the train arrived, so jumped on the train and got my water brush out. I only had 2 stops to travel, so with waterbrush and a little more detail I had finished the sketch by the time I had arrived at South Yarra. No. 2: Tuesday. On the same platform going ‘home’ (I was staying with friends about 20 minutes train ride out from the centre) This time I used my ink pen and sketched the clock tower on the left, once again was in control in regard to time so then looked to my right and sketched the dome again. As I was sitting down I grabbed my paint tin and my water brush (one of the rare occasions that I use it) Blocked the main colours of both sketches and then drew with the paint brush for the smaller dome. My book was quite wet when I jumped on the train – a little more work on the way home.

Both No. 1 and 2. sketches were examples of making the most of a fleeting opportunity to sketch. 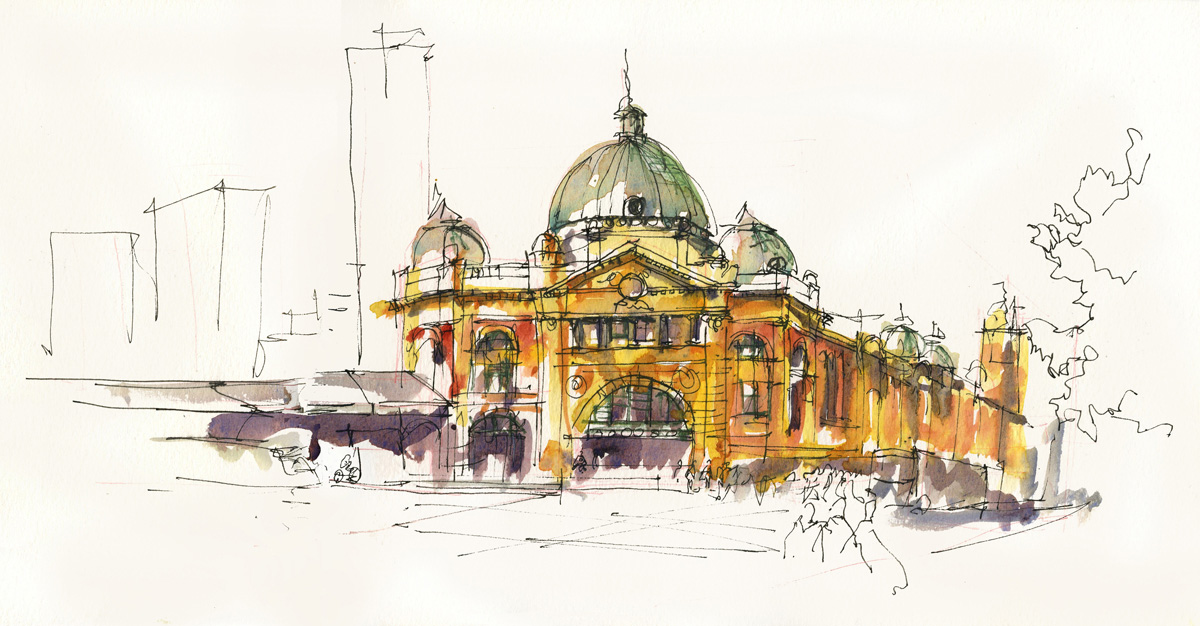 No. 3: Friday. This was my morning to myself so I could take it slowly. I really wanted to capture the majesty of the building and how it addresses the main intersection of Flinders and Swanston. I set up my eyeline and a few perspective lines but the main focus of this sketch is the main facade which crosses the corner at a 45 degrees splay. As I was sitting directly opposite this, the main part of the building was straight on for me. I carefully controlled the amount of linework particularly as the building moved down the street and as usual applied my paint very loosely. It was important for me to include the sides of the building which really express the nature of the building- a train station with platforms extending out on both directions. I could have drawn more of the busy intersection – but felt that that would be better for a different sketch in which the activity was the focus and the building the background (sadly I didn’t get a chance to do this version!)

No. 4: Saturday. The view of the city skyline from Southbank was a good chance to do another one! The extravagant dome and the horizontal nature of the station building and platforms really dominate this view and are balanced by the verticality of St Pauls. The rest of the city buildings are secondary…..  Doing just a bit of talking while I was doing this one – so I resorted to my old pen and wash technique. No 5. Monday. While doing version 3 I was really longing to get my teeth into the wonderful details of this building but that was a context sketch so not really the time or place. I had 20 minutes to fill in before meeting some local architects for a coffee… so guess who went a little nuts. Having 40 minutes would have been a much better amount of time …but anyway I had fun! Cold gray morning! As  my time was limited and I also wanted to capture the architectural details, I grabbed my ink pen for this one. There is no doubt that doing ink lines to define the form enabled me to work looser and quicker with my paint. No. 6: Monday. I wanted to do another sketch of Fed Square so after the coffee came back to the area… but Flinders St station was still calling me to sketch it! So sitting on the Fed Square side I drew an angled version using a watercolour grey pencil for the linework. As I had more time was experimenting with loosing my line. The side view showing the major forms of the building meant that I was happy for the details to blur and it was a lot of fun to try a more painterly version (though still using lines I know…)

I do not feel like I have adequately captured this building on my page…but these are a start! I am really pleased with the way that each version is quite different, telling a different story and using different media depending on the time and purpose of the sketch.