The Urban Sketchers community is shocked today by the news that Florian Afflerbach (Flaf) was killed in a tragic traffic accident yesterday. Flaf was one of my friends on Flickr in the very early days of Urban Sketchers – maybe even before that. He was known for his incredible perspective architectural drawings and cars. I think recently I was seeing more car sketches than architectural ones. He was also a great architect, educator and scholar. He was on the faculty of the Technische Universität Dortmund, Germany.

I feel honoured that I met him twice and he was one of the sketchers I was most looking forward to catching up with in Manchester in July as I hadn’t seen him since the Barcelona in 2013. I was hoping to ask him about his masters research on architectural drawing and other things. I have so many great memories of him, especially from the 2nd symposium in Lisbon, when I first met him and spent some great time together, including talking about architecture sketching and perspective. (photo by Matt Brehm).

I was very inspired by his perfect perspective (as a fellow architect) and he gave me some great tips about sketching cars that I think about ever time I draw them. I refer to his work in every Sketching Architecture workshop I do. Here is a photo of the last time I was with Florian (at the Barcelona USK Symposium) looking through his amazing big sketchbook. (Photo by Debo Boddiford)

I was obviously saying to him (just out of the photo) how amazing his work was! One of his tricks was to draw small-ish in a very big sketchbook so the vanishing points were on the page. He didn’t do that every time, but that is the ‘secret trick’ that has stuck in my mind! Today, after spending a little time on facebook, I had to rush out to door to make it to our monthly USK Sydney event. I grabbed my copy of Florian’s Card Playing Cards to take with me. These cards have a special significance for me since I use to play with similar cards Ace Trump Cards with my brothers when I was very little. I find sketching enables me to process things and remember going outside after my nanna’s funeral to sketch her house which really helped. This morning I just had to move the paint around on the page initially as I was still in shock, in fact I was a bit of a mess after my teary announcement to the group. I also noticed Flaf’s cards sitting on the ground and the memories of conversations, emails and comments came rushing back. So in many ways this was a reflex sketch and I couldn’t help thinking how different this style of sketching was with Flaf’s. Anyway, with his voice in my head, I decided to do a pencil perspective version in honour of the artist and friend who inspired me so much in the early days of my sketching. I understood perspective theoretically but didn’t know how to use it out on the streets. Florian’s work was so important to me back then. Although I prefer to work looser, the technical aspects are always in my mind.

I think that Flaf would have laughed and said something like “see Liz, you can do a technical perspective drawing if you put your mind to it!” Oh! I will miss our banter.

Of course as I was using a water soluble graphite pencil I had to mess it up a bit, but the Flaf inspired pencil construction lines were there. At the end of the meet we took this group photo everyone holding one of Florian’s cards.
We support each other and draw together He was such sweet guy, and great artist/architect. I feel truly blessed to have met Florian, but his work will live on, inspiring many Urban Sketchers in years to come.

I am very sad, but most of all right now I am feeling heartbroken for his partner Tina, his family, loved ones and his close (sketching) friends – those who have spent much more time with him. I am also thinking much about the USKers in Germany and those who were with him in a workshop in Malaga only a few days ago. You all will certainly be in my prayers.

Sending you all a big hug! 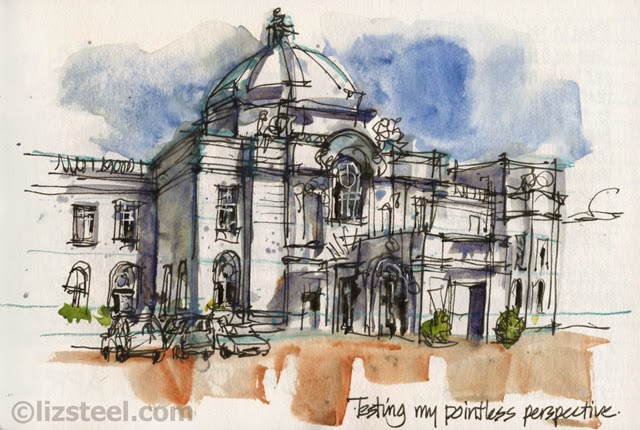